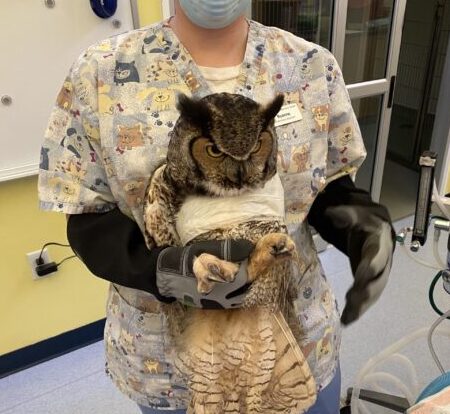 I went to Pine View Wildlife Rehabilitation and Education Center a couple of days ago and checked out the great horned owl I helped with a broken wing in March. The staff took great care of her and she had graduated to a large flight cage. But in recent weeks her flight performance plateaued and she couldn’t sustain flight long enough to make her a good release candidate.

My evaluation found that her left wing had some mild limitation of extension but the joints seemed healthy. The bones were solidly healed (and this was confirmed in recent x-ray images as well). The problem is most likely stemming from badly shredded muscles in the forewing.

For weight economy, birds have very little muscle and soft tissue in their wings, particularly past the elbow. It’s a plus for flying but when bones break, the fragments become knives that shred up the sparse covering of muscle and skin. This not as much of a problem in mammals but in birds it often leads to exposed bone ends that quickly dry out and become impossible to fix. We were fortunate in this case that Pine View and the staff at Best Friends Veterinary Center kept the bones clean and moist so we were able to fix the fracture. However, muscle damage was severe and there wasn’t much, beyond splinting, that could be done about that until surgery. And most of that damage was likely done at the moment of injury (in this case, probably hit by a vehicle). Still, it’s usually worth it to try the repair and oftentimes, with physical therapy, the muscles can recover.

Unfortunately, in this case, the damage was too severe and has resulted in just a little too much loss of performance. The bird will either be placed in an education facility or, if that’s not possible, humanely euthanized. It’s a sad outcome (and a very common one with wildlife) but I always have to remind myself that without help, the bird would have never had any chance.

Thank you to the people out there that support wildlife rehabilitators through their hands-on volunteer service and their financial support. Also to those that take time to stop along the road and help birds in need. This bird would not have had a chance without your compassion!